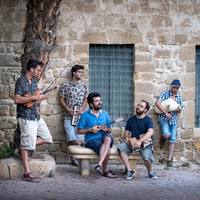 Project Reggetiko is a musical meeting between people with very different creative roots, who share the same love for improvisation and direct musical interaction. The result is an experimental, collective form of expression that treats music and improvisation as a way of communication between people. Reggetiko Project's philosophy is that simple or complex, music making should always be characterized by mutual respect and honesty.

Everything started in 2010, when Theodore Koumartzis met Francesco Riotta in Spain. During the first attempts to improvise and to try to play together, they started instictively mixing rhythms and melodies of the Greek music genre named "Rembetiko" and acoustic reggae. The sweet sound of baglamas and the rhythmical acoustic guitar were the first instruments used in order to produce the first idea of "Reggetiko".